Come explore the Presidio! Hike one of the Presidio’s dozen major trails, wade in the ocean at Baker Beach, jump on trampolines at the House of Air, or visit the Walt Disney Family Museum. The Presidio offers a variety of outdoor-oriented activities for the whole family! The southern end of the Golden Gate Bridge is anchored at the northernmost point of the park. 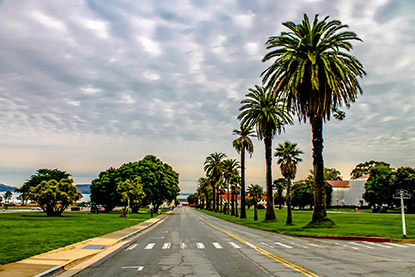 The free Presidigo Shuttle operates within the Presidio National Park. It operates on a one-way loop that leaves from the Transit Center, passes Crissy Field, the Golden Gate Bridge, Baker Beach, and Inspiration Point before returning to the Transit Center.

For those walking or bicycling without a tour guide, use the San Francisco Bike Map to plan your route. https://www.sfbike.org/resources/maps-routes/

BIG SAVINGS on Unique Happenings in the Presidio

Under American ownership, the Presidio was transformed from sparse dunes and shrubbery into a regional military post with roads, apartments, batteries, and more. The military even planted trees, many of which still stand today.

In 1989, the Presidio ceased operation as an active military installation. On October 1, 1994, ownership was transferred to the National Park Service, which operates and maintains the Presidio today. 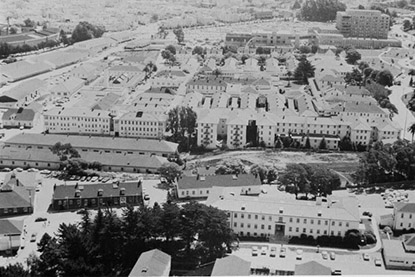 The Presidio’s main draw is its multitude of hiking trails and scenic overlooks. Every morning, dozens of cyclists, joggers, hikers, travel through the Presidio. Locals and tourists alike enjoy this beautiful public park, which offers free transit via the PresidiGo Shuttle Around the Park.

Presidio hiking trails lead throughout the entire park, from the high tree-covered hills to the Lobos Creek dune habitat. The highlights of these trails are their overlooks, which offer breathtaking views of the bay, Pacific Ocean, city, and more. Visit Immigrant Point Overlook for panoramic views of the Pacific Ocean. Inspiration Point offers views of the Presidio, Palace of Fine Arts, Alcatraz, and the bay. Find out more about Presidio Trails and overlooks at Presidio Experiences.

The Presidio is owned and operated by the National Park Service, which manages restoration and maintenance of the grounds and historical buildings. Officer housing has been converted into single- and multi-residential homes leased to the public, while other military housing and buildings are leased to nonprofits. 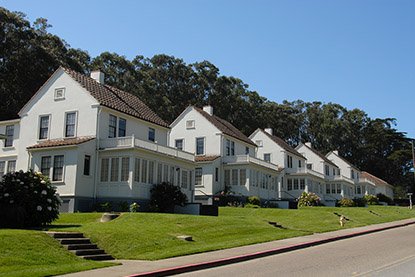 The Presidio is home to red-tailed and red-shouldered hawks, ravens, pelicans, juncos, and other native birds. Wild parrots, whose true origins are now lost, frequent the sunnier end of the Presidio near Letterman Digital Arts Studio. Their brilliant green and red plumage make them easy to distinguish from local songbirds, and their laughter-like vocalizations make them easy to locate. Raccoons, foxes, and an estimated 12 coyotes also live in the Presidio area. Visitors often spot these larger animals at dawn or dusk.

Dolphins and porpoises often swim past Baker Beach and are visible from the heights of the Presidio coastal bluffs. A tip for nature enthusiasts: if you spot pelicans, they are a good indicator that dolphins are nearby (both feed off the same schools of fish.)

The bedrock of the San Francisco and Marin Headlands is made up of serpentine, California’s state rock. Serpentine soils lack certain nutrients, so the plants in the area are specifically adapted to deal with the nutrient-poor soil. One such plant is the native Presidio Clarkia, a slender herb flower, which exists only in the San Francisco Bay Area and is endangered due to increased foot traffic in its native habitat.

The Presidio is usually foggy in the summer, even when the downtown Financial District is sunny. Depending on the time of year, fog either lingers or blows over to reveal sunny skies. Visitors should note that, as with all locations in San Francisco, the weather can change unexpectedly in a very short time. Layer in warm clothing that you can remove as the weather warms up. Walk, bike, or drive San Francisco’s most iconic landmark, the Golden Gate Bridge!!

Whether the sun is shining or fog is streaming through the bridge’s awe-inspiring arches, the Golden Gate Bridge is a must-see. Visitors can park for $0.25 per 15-minute period and pose for pictures, or walk across the bridge for free.

Baker Beach: located at the southwestern edge of the Presidio, Baker Beach is a popular destination. Sea glass washes up in the rocks deposited on the sand, and sea gooseberries dot the beach in the winter months. The north end of Baker Beach is popular with nudists, so if you want to avoid the area be aware of how far up the beach you wander.

San Francisco National Cemetery: almost 30 acres in size, the cemetery is the final resting place of over 30,000 military veterans. The cemetery is serene and offers views of the bay through the Presidio trees.

Presidio Golf Course: this 18-hole course offers views of the Pacific Ocean, the San Francisco Bay, and the Golden Gate Bridge. Reserve your spot up to 30 days in advance, or free of charge 1-7 days in advance.

Presidio Visitor Center: located at the heart of the park on the Main Post at 210 Lincoln Boulevard, the visitor center features interactive exhibits about The Presidio’s history and a digital calendar for all park events.

Letterman Digital Arts Studio: Owned by George Lucas, it is based in the Presidio and is located near the Lombard Gate. At the nearby Starbucks, patrons might overhear Lucasfilm employees discussing characters (with names carefully omitted,) or see movie industry professionals sipping a latte at lunch.

Yoda Fountain: Nestled in a small courtyard at Letterman Digital Arts Studio, the Yoda Fountain pays tribute to George Lucas’ beloved Star Wars franchise. Visitors can walk up to the fountain to take pictures and, if they are lucky, sneak a peek into the lobby of the building to ogle the life-sized movie character cutouts.

Golden Gate Bridge: San Francisco’s #1 destination. It is located at the Northern tip of the Presidio and can be reached on foot, by car or muni, or by the PresidiGo Shuttle.

The Palace of Fine Arts: Just .3 miles away from the Lombard Gate—popular with school groups, tourists, and locals.

Fort Point: Nestled beneath the Southern end of the Golden Gate Bridge, is a historic fort designed to protect the San Francisco Bay from naval attack. It is accessible by a combination of muni/shuttle and foot transportation.