A Golden Gate National Recreation Area, Lands End is a lesser known park in San Francisco. There are many hiking trails to follow including the popular California Coastal Trail. A forested shoreline of 200-foot cliffs near the strait of the Golden Gate. Notable landmarks in the area include the USS San Francisco Memorial, the Holocaust Memorial, and the Legion of Honor. The ruins of the Sutro Baths and historic shipwreck sites, visible at low-tide, are also in the Lands End area. 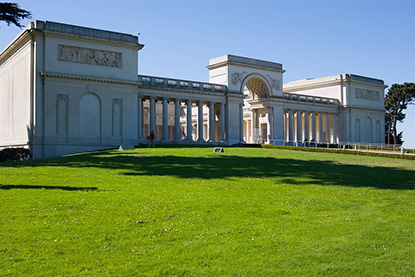 Muni line 18 stops directly in front of the Legion of Honor museum, lines 1 and 38 have bus stops in the area.

Parking lots are located at the Lands End Main Lot off of Point Lobos Ave., the Legion of Honor Museum and the USS San Francisco Memorial.

BIG SAVINGS on Recommended Things To Do

Legion of Honor: As lovely inside as out, the museum overlooks the Pacific Ocean, Golden Gate Bridge and a significant portion of San Francisco. Collections include Rodin’s Thinker, European decorative arts and paintings, Ancient art, and one of the largest collections of prints and drawings in the country.

Cliff House Restaurant: where you can not only enjoy a meal or a drink overlooking the Pacific, but you can also see vestiges of the Sutro Baths among the building’s memorabilia.

Lands End Labyrinth: a small maze of rocks off the Lands End Trail overlooking the Pacific Ocean with a glimpse of the Golden Gate Bridge.

Golden Gate Bridge: arguably one of the world’s most beautiful bridges, the Golden Gate Bridge is an internationally recognized symbol of San Francisco. Over 45 million vehicles cross the bridge annually!

The Presidio: is located at the southern end of the Golden Gate Bridge and contains Fort Point, Crissy Field, and the Walt Disney Family Museum.