Walk or drive down Lombard Street’s 8 world-famous hairpin turns and enjoy breathtaking views of the San Francisco Bay! Lombard Street is often called the “crookedest street” in the world, but in reality, it is not even the most crooked street in San Francisco! Despite this, thousands of people drive or walk down Lombard Street every year. It’s famous cobblestone switchbacks, bordered by hydrangeas and Victorian houses, remain a favorite destination for visitors from around the world. The crooked portion of Lombard Street is located between Hyde and Leavenworth Street, with Hyde being the top of the hill and Leavenworth being the bottom. 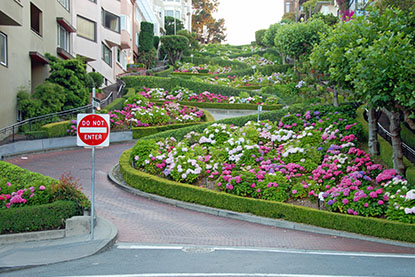 Muni 19 drops off at the intersection of Lombard and Polk Street. Walk two blocks east to reach the top of the crooked section of Lombard Street. Muni 30 drops off at Columbus and Lombard. Walk two and a half blocks uphill to the base of the hill. As an alternative, take the Hyde/Powell cable car from Hyde Street near Ghirardelli Square in Fisherman’s Wharf.

When the first homes were built on this hill on Lombard Street, the grade was 27%. The grade was too steep for cars, decreasing the property value in an era when automobiles were becoming standard. Claiming that the steep grade thus caused damage to property value, landowners successfully petitioned the city to re-grade the road. In 1922, city engineer Clyde Healy designed and reconstructed the street with 8 switchbacks and a 16% grade. The lower grade made the hill accessible to automobiles, raising property value for landowners and making the hill an easier walk for pedestrians.

In the aftermath of the 1906 earthquake, the homes on the southern side were cleared to create a firebreak. The homes were not rebuilt until after the switchbacks were added to the hill in 1992.

The crooked portion of Lombard Street was a two-way street until 1939.

The wait to drive down Lombard Street during tourist season can range from 30-45 minutes on an average day, making a walk down the street’s 250 steps more appealing for those with time constraints. Tour buses are prohibited on the crooked portion of Lombard Street. Out of consideration to the residents, please remember to be respectful of the homes’ bushes, sculptures, and general premises.

The crooked portion remains a one-way eastward street heading downhill from Hyde to Leavenworth Street. Tourists can walk up and down the 250 stairs on either side of the road and snap pictures of the city sprawled across the panorama. 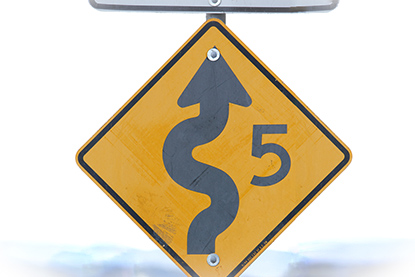 Ghirardelli Square: Go four blocks north of Lombard Street. Walk over for an ice cream during hot days, or for a hot chocolate with whipped cream on a cold day.

Pier 39: About a mile northeast, packed with attraction shops, restaurants, and the Aquarium By the Bay.

Coit Tower: Offers stunning panoramic views of the city. Continue down Lombard Street for a mile until you reach Pioneer Park. Coit Tower is located on top of the hill in Pioneer Park.