Golden Gate Park’s 1,017 acres cover more area than New York’s Central Park! Come watch bison carouse around their enclosure, rent a paddleboat on Stow Lake, or take a Segway Tour and learn the park’s history! Whatever activity you choose, you are sure to have a blast! 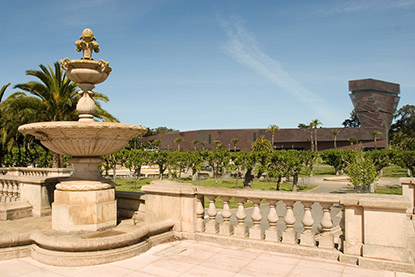 Public transportation is the best way to get to the park. Although cars can travel through the park, access is restricted to certain days and times of the week. To avoid this and the hassle of parking, take Muni to the park. Numerous Muni lines run through or to the park. Visit 511.org to plan your trip.

Driving: If you must, a public parking garage is located underground by the de Young Museum and the California Academy of Science. Parking is also available at the sides of most roads within the park, but it can be difficult to locate an empty spot with the thousands of visitors there each weekend. During busy days, many visitors park on the neighborhood streets outside the park and walk in.

Today’s Golden Gate Park is lush, covered by trees, grass, and exotic plants. Everything you see, however, is man-made. The park is built over what used to be acres of sand dunes sparsely populated with native grasses and shrubs. These outer lands were inhospitable and, according to many, inhabitable.

William Hammond Hall changed everything with his decision to create the public park. With the joint effort of horticulturist John McLaren, William Hammond ignored all advice and followed through with his vision to create a man-made oasis of greenery amidst inhospitable dunes. After the city’s long struggle to secure the land and develop the park, construction began in the fall of 1870. The transformation from dunes to a landscaped public park was now underway, although not without a struggle. It took years to convert the sands to something that could sustain plant life, but the struggle was worth it. The park was a success from the start and remains so today. 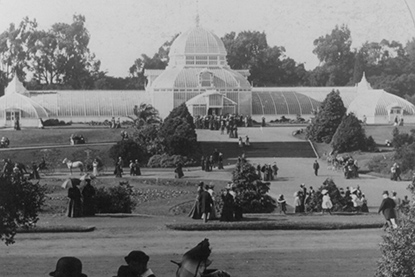 No one would have predicted the success that Golden Gate Park would become. From its beginnings as dusty sand dunes on the outer lands of San Francisco to today’s premier tourist destination, the park’s history is filled with both stories of success and stories of perseverance against adversity.

The Japanese Tea Garden, curated by Makoto Hagiwara and built off the exhibition at the Panama-Pacific Arts Exhibition of 1915, is one such story of overcoming adversity. When its Japanese-American curators were forcibly relocated to Japanese internment camps during WWII, the garden fell into a state of disarray. Years later, the garden was restored and has found success as a destination for locals and tourists today. 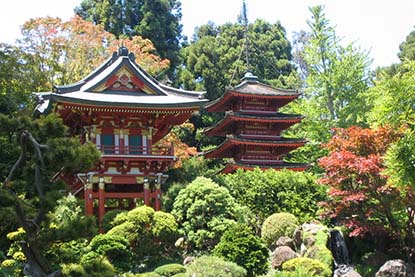 Golden Gate Park offers a wide variety of activities to suit a broad range of interests. Visitors will find all of the following things to do and see within the park, and more:

Popular Things to Do

Segway Tours: San Francisco Electric Tour Company offers a narrated 2.5-hour tour of Golden Gate Park. Riding a Segway is easy to learn and the tour is a blast!

The Haight: This funky, eclectic district saw the free love movement of the ‘70s, war protests, and was the home of the Grateful Dead. Shop in the unique collection of mainstream shops and stores inspired by eastern religions, or peruse the used CDs and DVDs at Amoeba Music. Located at the Eastern end of Golden Gate Park.

Ocean Beach: Play in the surf and explore the coastline! Located at the western end of Golden Gate Park.