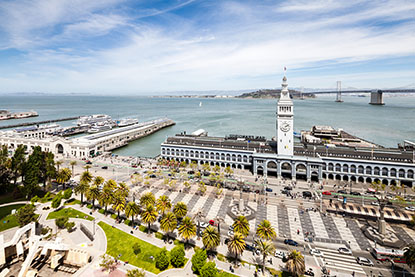 This grand palm-lined boulevard along San Francisco Bay derives its name from the Spanish verb embarcar, meaning “to embark.” Along the Waterfront you will see Alcatraz Landing at Pier 33, the Cruise Ship Terminal at Pier 27 and a must visit; The Exploratorium at Pier 15. There you can explore how the world works through creative, thought-provoking exhibits that ignite curiosity and encourage exploration.  At the foot of Market Street and across from Justin Herman Plaza is the historic Ferry Building, here you can explore specialty shops, grab a bite to eat at Gott’s Grill, or pose for pictures against the backdrop of the Bay Bridge!

Catch the F or E streetcars that run along the Embarcadero every 15 minutes. Streetcar F runs from the Castro, along Market, and up Embarcadero. It stops in front of the Ferry Building and continues to Pier 39 until it turns around at Fisherman’s Wharf. Walk up Market Street toward the bay from the Embarcadero BART Station. Or take one of the many Muni Bus routes are available from all over the San Francisco Bay Area.

HOT DEALS Along the Waterfront

Built on a man made seawall, the Embarcadero landscape has greatly changed over the years. A busy seaport in the early 1900’s, a military hub during WWII, the Embarcadero Freeway constructed in the 60′ and torn down in 1991 after sustaining damage in the 1989 Loma Prieta earthquake. 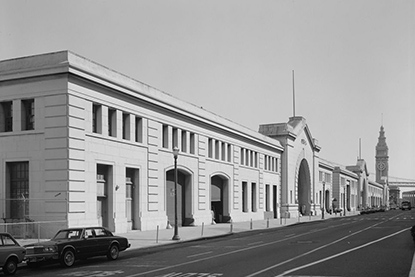 Beautifully reconstructed, the Embarcadero Waterfront is booming with activity. Large sidewalks to accommodate the thousands of visitors. Historic Street-Cars running up and down the roadway. Easy access to go to or from the Fisherman’s Wharf, The Financial District, AT&T Park, Market Street and Bart transit. 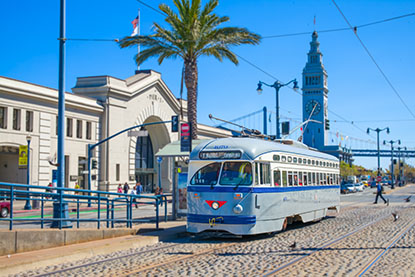 Ferry Building: The three-story Ferry Building is located at One Ferry Building on Embarcadero Street. Its clock tower makes the building easy to spot. Home to restaurants, small eateries, cookware specialty shops, and an independent bookstore. The interior was renovated in 2003, restoring the Ferry Building to its original grandeur and creating a luxurious open-market feel amongst the lofted ceiling. Ferries still operate today, carrying thousands of commuters and tourists every day, tickets can be purchased in advance or before boarding at the ticket kiosk.

Farmers Market: Held three days a week, the effervescent Ferry Plaza Farmer’s Market is located in front of the building on Tuesday and Thursdays, and both in front and in back of the building on Saturdays to accommodate the larger crowd. You can purchase a diverse array of fresh produce, meat, eggs, and other locally grown and farmed items. Depending on which day of the week you attend, you can listen to live jazz music or watch a cooking demonstration. Bring a reusable bag and some cash, because this farmer’s market is too good to resist!

The Bay Bridge: Less than half a mile from the Ferry Building.

Coit Tower: is located a few blocks north of Washington Square in Pioneer Park. Visit for stunning panoramic views of the San Francisco skyline, and don’t forget to peruse the museum on the ground floor.