Eclectic and funky, the Haight-Ashbury district of San Francisco unapologetically marches to the beat of its own drum. Hippies, Goths, Punks, tourists, and locals come to the district for a taste of something a little different from the mainstream stores and music of downtown San Francisco. 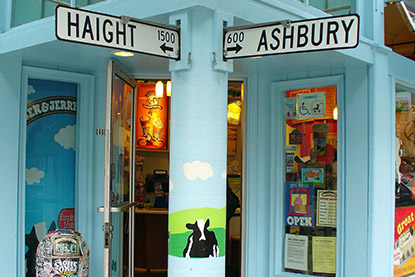 Rent a Bike and explore the neighborhood!

The Haight is most famous for the 1967 Summer of Love. Hippies, disaffected youth, transients, and artistic types during were drawn to the counter culture of sex, drugs, music, and free love that reached its height in the Haight. It was here that misfits found a place to belong and musicians played for each other’s ears. The district attracted those who sought a deeper meaning to life and new ways of expression.

Many found enlightenment by adopting the practices of Eastern Religions such as Buddhism, Hinduism, and Taoism. Others found new ways of expression with the aid of psychedelic drugs, which were thought to unlock new paths into the unconscious. Musical groups such as the Grateful Dead began in the Haight, often singing songs that were political or deliberately anti-political.

The Haight’s quirky combination of eastern-religion inspired boutiques, smoke shops, and vintage clothing stores illustrated how the past still influences the Haight of today. Even now, dreadlocked hair, hippie-style clothing, and communal living lifestyles are a visible aspect of the Haight’s contemporary counter culture. The area draws a diverse array of visitors, from the casual visitor to tourists from around the world.

Today, independently owned cafes, restaurants, boutiques, and more line the streets of this eclectic district. The street offers a wide selection of high-end vintage boutiques, retail clothing stores, and novelty shops. For a list of Haight Street Shopping, visit HaightShop.com. Most Haight shops are not listed here, so be sure to visit in person to find a steampunk-inspired clothing store, high-end shoe boutiques, and more. 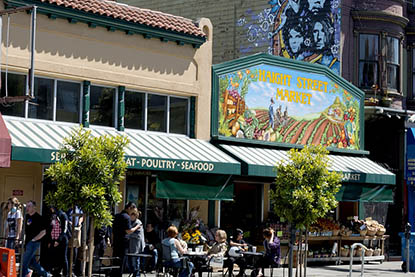 The spray-painted wall between the Smoke Shop and Amoeba records is a visually stunning representation of alternative art. Plastered with graffiti-style lettering, spray-painted scenes, and stylized figures, the wall is as unique as the neighborhood itself. Visitors can find additional street art and murals at the far end of Haight Street.

The Red Victorian: this red, 18-room bed and breakfast is also a peace museum. Visit on Sunday mornings for Breakfast Conversations, the casual group conversation on a diverse range of topics. Take a tour, eat in the café, or engage in thoughtful conversation with travelers from around the world.

Music fans should visit 710 Ashbury Street for a look at where the Grateful Dead made their home in 1967. 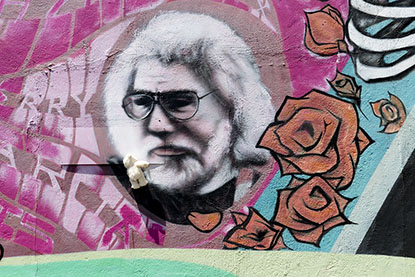 Not to Be Missed

The Haight Ashbury Street Faire: in June brings together the varied cultures that have influenced the Haight and made it what it is today. Live music, vendors, food, and more combine to make the festival a delightful attraction for tourists and locals alike. The faire stretches over five city blocks from Stanyan to Ashbury. Attendees can park their bike at the bike check-in, where volunteers accept tips for storing the bicycle in the bike lot.

Vendors sell freshly squeezed lemonade, Korean-style hot dogs, barbequed kabobs, and a variety of ethnic food. The festivities are not limited to the streets; residents often party on the upper levels of converted Victorian houses, blaring music and greeting people on the streets from open windows.

Ocean Beach: Enjoy a stroll along San Francisco’s longest beach! At over 1.5 miles long, Ocean Beach’s vast length provides plenty of space for a variety of activities and visitors. The beach is located at the western end of Golden Gate Park.

Japantown: Experience San Francisco’s Japantown! This six-block district is known for its sushi, traditional massage, shopping and more! Visit in April for the annual Cherry Blossom festival, or visit any day of the year for a taste of authentic Japanese Tea. Located on Post Street, Japantown is a unique cultural destination that every visitor should see.

Alamo Square: Pose for pictures against the backdrop of the San Francisco skyline and the Painted Ladies! Featured in the opening credits of the TV series Full House, the Painted Ladies consist of five beautiful Victorian homes facing Alamo Square. The square offers .5 square miles of open space for a picnic, a nap, or a variety of other activities.