Named for the local Spanish Mission (Mission Dolores), the Mission District is a vibrant and varied neighborhood famous for its street murals, delicious Mexican restaurants, and historical landmarks. Visit for a different side of San Francisco, where Latin influences have combined to make one of the most interesting cultural neighborhoods in San Francisco. 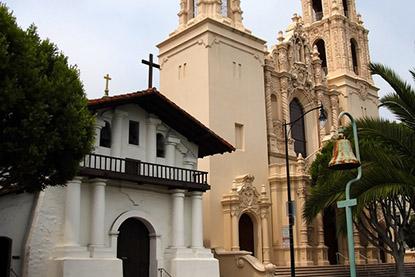 With BART stations at 16th street and 24th street, the Mission District is accessible from most anywhere in the Bay.

Recommended Things to Do

The Mission refers to the neighborhood bordered by Delores Street and Potrero Avenue from West to East, and the Central Freeway and Cesar Chaves Street from North to South. Known for its Hispanic immigrant culture, the area is different from other mainstream districts in San Francisco. The heart of the Mission is 24th Street, which features the highest concentration of Mexican restaurants and eateries.

To truly appreciate the Mission’s distinct culture, visit the neighborhood’s fantastic murals. These vibrant images grace the walls with the collective dreams and aspirations of immigrant families and local citizens. Visit both the Balmy Street and Clarion Alley murals to experience the ever-changing traditional and contemporary street art.

Balmy Street Murals: These beautiful murals combine real life with the fantastic. In one, immigrants stand in their homeland amidst agricultural fields and pastoral settings, while in another a stylized woman gives birth into a stream of water that flows from her body. Others depict children at play and adults working. To see these murals, walk along Balmy Street between 24th and 25th.

Another collection of murals adorns Clarion Alley, located between Mission and Valencia Streets and bordered by 17th and Sycamore Streets to the north and south. The murals here reflect a modern style of art as compared to the traditional murals of Balmy Street. On Clarion Alley, visitors will see cartoon characters, realistic modern portraits, street graffiti, and more.

Dance to traditional or alternative blues at Shades of Blues, the dance club on 3040 22nd Street. If you would rather watch a show, try the Romane Event Comedy Show or catch a performance at the Brava Theatre Center.

Hungry for some cheap, delicious Mexican food? Try El Gallo Giro Taco Truck, located at 23rd St and Treat St in the Mission. Their carnitas and authentic Mexican food make it a local favorite. Be sure to bring cash, as this taco truck does not accept cards.

Named after Mission Dolores, Dolores Park is located two blocks south of Mission Dolores. The park is situated on a hill overlooking the San Francisco skyline and is the ideal location for photographs, picnics, and exploring. Visitors can play tennis, basketball, soccer, or play on the children’s playground.

As with many of San Francisco’s open spaces, the site of the park was home to refugees of the 1906 earthquake. After the last refugees left in 1908, the land underwent renovation and became the park it is today. Dolores Park has been the site of activities such as political rallies, San Francisco Mime Troupe performances, and the annual Dyke March.

Garfield Square & Athletic Field: visit for a barbeque or to watch uniformed soccer players play on the field’s new Astroturf. The lights usually stay on until 10 to accommodate late pickup games, making the area a safer location to visit at night.

Dia de los Muertos: Translates to Day of the Dead. This annual celebration is held every November in Garfield Square. Over 15,000 people attend the event, which celebrates the community through art and music. Locals come together to share food with each other and in honor of their ancestors.

Mission Dolores: is the oldest intact building in San Francisco. Part of a complex built in 1776 under the direction of Father Serra, Mission Dolores survived the earthquake of 1906 and resultant fire, as well as the 1989 San Francisco earthquake. Visitors can take a self-guided tour with a suggested donation of $7.00 for adults, and $5.00 for seniors and children.

The Castro: as the heart of San Francisco’s gay culture, this neighboring district is known for its fabulous shopping, nightlife, cafes, and for its welcoming attitude to people of all backgrounds. Visit the GLBT Museum, the HRC store, or walk up and down its streets to find a welcoming café to sit in.

The Haight: Eclectic and funky, the Haight district of San Francisco unapologetically marches to the beat of its own drum. Hippies, bohemians, tourists, and locals come to this cultural shopping district for a taste of something a little different from the mainstream downtown San Francisco.

Golden Gate Park: Golden Gate Park’s 1,017 acres cover more area than New York’s Central Park! Visit the Conservatory of Flowers, watch bison carouse around their enclosure, or take a Segway Tour and learn the park’s history. Whatever activity you choose, you are sure to have a blast.