Bordered on the south by Market Street and on the north by Turk Street, Civic Center stretches to Franklin Street on the west and Leavenworth and Seventh on the east. Its proximity to BART and Muni make the center an easy stop to include in your itinerary.

Civic Center consists of Civic Center Plaza and United Nations Plaza, each bordered by a variety of buildings designed in the classical architectural style of Roman columns and gilt facades. The awe-inspiring architecture houses governmental institutions such as City Hall, cultural attractions such as the War Memorial Opera House, and public resources such as the San Francisco Public Library. 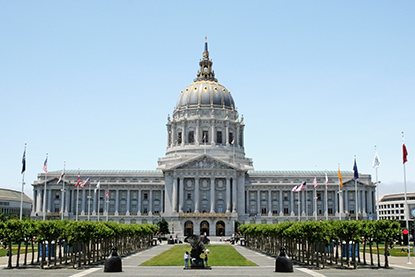 When San Francisco’s original governmental buildings were destroyed in the 1906 earthquake, architect Daniel Burnham drew up plans for a neoclassical style Civic Center to serve as the first of many projects intended to beautify the city.

Construction on City Hall and the Exposition Auditorium finished in 1915. Additions were made over the years, including the addition of the Victory Gardens in front of City Hall during WWII and the Symphony Hall in 1980. Most recently, a new building for the public library was constructed in 1995, with the Asian Arts Museum moving into the vacated space in 2003.

Civic Center’s broad plazas have served as the gathering place for notable political occasions since its construction. Harvey Milk’s speeches, anti-war rallies, and more have taken place at the Civic Center, whose proximity to City Hall makes it an appealing destination for political activism.

Today, Civic Center is used for a multitude of occasions including a weekly farmer’s market and a variety of festivities. San Francisco’s Pride Parade holds its festivities in the plaza once the parade has finished, featuring street vendors and hundreds of LGBT-themed products.

When the San Francisco Giants won the World Series in 2010, thousands of fans and spectators packed Civic Center and the adjoining streets to watch the World Series Victory Parade. The festivities spilled over into additional streets and made headlines across the country.

The most notable building in Civic Center Plaza is San Francisco City Hall. City Hall can be considered the crowning jewel of the plaza; its manicured hedges, iron gates, and gilded framework make the building one the most beautiful in the plaza. It certainly is the largest; covering the length of an entire city block, City Hall’s rotunda is easy to spot from blocks away.

The Asian Art Museum is located at 200 Larkin Street, across the plaza from City Hall. The building used to house the San Francisco Public Library, until the construction of a new site for the library opened the building up for the Asian Art Museum. The museum opened at the Civic Center location in 2003. The museum displays centuries’ worth of Asian artifacts from multiple countries.

While Civic Center is home to a wide variety of cultural attractions, visitors should note that the seedy Tenderloin district is located only a block away. Homeless people do sleep in the park despite the city’s attempts to clear it, and panhandlers stand at street corners, but the area is still safe and remains an attraction worthy of visiting.

The Heart of the City Farmer’s Market meets here on Sundays from 7am-5pm and Wednesdays 7:00am-5:30pm. The farmer’s market sells fresh seasonal produce (some of which is organic), in addition to herbs and flowers. This community-oriented farmer’s market is a great way to pick up a fresh breakfast and get a feel for San Francisco’s varied culture.

Watch a musical or play at the Orpheum Theatre! Located at 1192 Market Street, the theatre has produced multiple plays and Broadway-scale shows since its construction in 1926. The lush, 12th century-inspired Spanish interior accommodates over 200 seated guests. Past shows have included Monty Python’s Spamalot, Les Miserables, Bring it On, and Mamma Mia!

BART Civic Center/UN Plaza station is located on the Market side of the plaza, allowing easy access from multiple locations across the city.

Chinatown: is a few blocks from Union Square, and the Westfield Shopping Centre is even closer on Market Street.

Alamo Square: Home to the Victorian Painted Ladies shown in the opening credits of Full House, is within walking distance at about a mile away. Food and dining options are also available in the area, and the green space of Alamo Park make for a relaxing break from the rest of the city.

The Castro District: Considered the heart of gay culture in San Francisco, the Castro district is 2.3 miles away. Catch the F line from Market Street to visit this dynamic neighborhood and spend hours shopping, dining, or barhopping.